When planning a trip to spots where the water temperature is far from warm, it’s important to know how to protect your body from hypothermia. Since Jack O’Neill began selling the first wetsuits in the 1950s, the choice has become much greater and more varied, and surely better. This article will help you pick the appropriate suit.

A bit of history

It’s widely known that surfing originated in Hawaii, but local surfers needed no wetsuits in warm water. Once surfing began to spread around the world, there was a need to somehow warm up in order to surf in cold water. The first surfing wetsuits appeared in the early 1950s. Have you heard of the O’Neill brand? It was Jack O’Neill, the surfer, in whose honor the brand got its name, He was the one who made and tested the first surfing wetsuit.

Jack O’Neill introduced the world’s first vinyl-based surfing wetsuit in California in the 1950s. It was far from being completely comfortable, but it retained heat perfectly and allowed surfing for a long time.

In 1952, Jack O’Neill opened the world’s first surf shop in a garage near the beach. A few years later he improved the wetsuit by making it from neoprene. The material retained heat even better and was more flexible. That’s the very material the wetsuits are made of to this day.

By the way, in order to prove the unique heat-insulating properties of his wetsuits to the world, Jack put them on his children and set them on ice, where they played calmly and comfortably with no harm to their health.

So, wetsuits are made of neoprene of various thicknesses and are designed so that you can stay in the water for longer periods of time without freezing while surfing. An extra advantage: a wetsuit protects you from accidental bruises and cuts.

How does it work?

The wetsuit is made of a special material – neoprene. Once water is poured into your suit, it quickly heats up upon coming in contact with the body. Thus, a thin layer of water, which heats up due to your body temperature, is formed inside the wetsuit. Neoprene insulates your body from cold water in the ocean. Accordingly, the more the neoprene thickness is, the better the insulation you get and the warmer you feel. However, bear it in mind, that the thicker the wetsuit is, the less it stretches and the more it constrains your movements, taking into account that we have to constantly move (row) while on board.

The key thing is to choose a wetsuit EXACTLY for surfing, or a very similar water sport like wakesurfing, kitesurfing, but not for other water sports like swimming or diving. Each sport has its own peculiarities; therefore the wetsuits are made specifically for a certain type, so that you were as comfortable as possible.

In order to choose the right wetsuit, you need to focus on the water temperature, where you’ll have most of your rides. It determines the thickness and length of the wetsuit.

If you go surfing in warm water, you may just need a lycra (we’ll specify the accessories below) and shorts. Perhaps, a short wetsuit from 1 to 2 mm will be just fine.

Colder water requires the use of the long one, with wrist length sleeves, and the pants covering your legs to the ankles. These wetsuits come in different thicknesses: 2 mm, 3/2, 4/3, 5/4/3, 6/5 and 7 mm.

Be sure to take your personal susceptibility to cold and how intensively you exercise into account: constantly rowing and catching a lot of waves, or sitting in one place, waiting for the best wave, having much rest, etc. If you are cold-sensitive, a warmer wetsuit will do. Slim ones may opt for a thicker wetsuit as well.

The thickness choice of your wetsuit is individual, but the tips are as follows:

At Tenerife Surf Point School, we use 3/2 mm wetsuits all year round. 2 mm ones are possible to be worn in the summer. We always use wetsuits to make you feel comfortable on water (lesson lasts 2 hours). Since you’re still learning and make many out of control and unnecessary movements, the wetsuit will protect you from accidental bruises. In case you already surf on your own, you can deal without a wetsuit during the summer.

A 3/2 mm wetsuit will do for the Canary Islands, Morocco, summer in Portugal, Spain, France (in winter in Portugal, Spain and France 4 / 3mm or more is better though), as well as for surfing in Russia in the summer (St. Petersburg, Kaliningrad , Sochi, the Crimea).

Wetsuits may be long, short, with or without sleeves.

Short – there are ones with short or long sleeves, 1 or 2 mm. Male version always goes with shorts just above the knee. Women’s have several variations: bikini, short shorts, long shorts.

Another type: Long John: a wetsuit with long legs, but sleeveless. This one is usually 2 mm and 3 mm.

The type of the wetsuit should be chosen according to the weather. If the water is more or less warm, but it’s windy, you may take a long sleeved wetsuit, but with short pants. If it’s sunny and windless, but the water is cool, you may ride in a sleeveless wetsuit, but with long pants. Also, pay attention to your fastest freezing limbs, these may be hands, then you should wear a wetsuit with sleeves, or perhaps legs, then wear a wetsuit with pants to the ankles.

Choosing the right wetsuit is still a challenge, but it’s definitely worth it! The convenience and efficiency of your ride depends on a well-chosen wetsuit.

Remember, when buying a wetsuit, make sure it fits you very tightly!

Once neoprene is soaked in water, it’ll stretch and you’ll feel more comfortable. Your wetsuit should fit you as tightly as possible, but at the same time, you should breathe freely and move your arms. See how the wetsuit fits you: are there folds anywhere, is the wetsuit loose in any parts? If it’s not tight enough, the fresh cold water will constantly get in and won’t have time to warm up. Sleeves and pants should end above your wrists and ankles, that is, above movable parts of your body, since it’ll stretch there and will let water through over time.

A very tight wetsuit will clamp your ankles and wrists, impair blood circulation, meaning you’ll freeze in no time.

It’s better to try on as many sizes as possible, wave your arms, squat and choose the most suitable one.

Each brand has its own size range, so try a wetsuit before buying it.

We do not recommend trying on the wetsuit upon a salty, wet body (e.g. after surfing). It will be hard to put on a new wetsuit, and it will seem uncomfortable.

Wetsuits come with a zipper on the back and collar.

Zipper on the back

Such wetsuits are easier to put on and take off, since when you unzip it, the wetsuit becomes looser and it’s put on with less effort.

Zipper on the collar

Such wetsuit fits denser, a little harder to be put on, but you’ll swiftly get used to it. Choose a zipper in accordance with your convenience. Regarding on-going surfers who already do Duck Diving, the front zipper is considered to be a better choice.

Another significant point is the seams. They can be stitched or glued.

Budget wetsuits have stitched seams only. The warmest models and expensive ones have the seams glued on one or both sides. Glued seams let less water through the wetsuits and therefore they hold heat better. Wetsuits with inside fabric lining are popular as well. This additionally warms you and is more pleasant to the body. 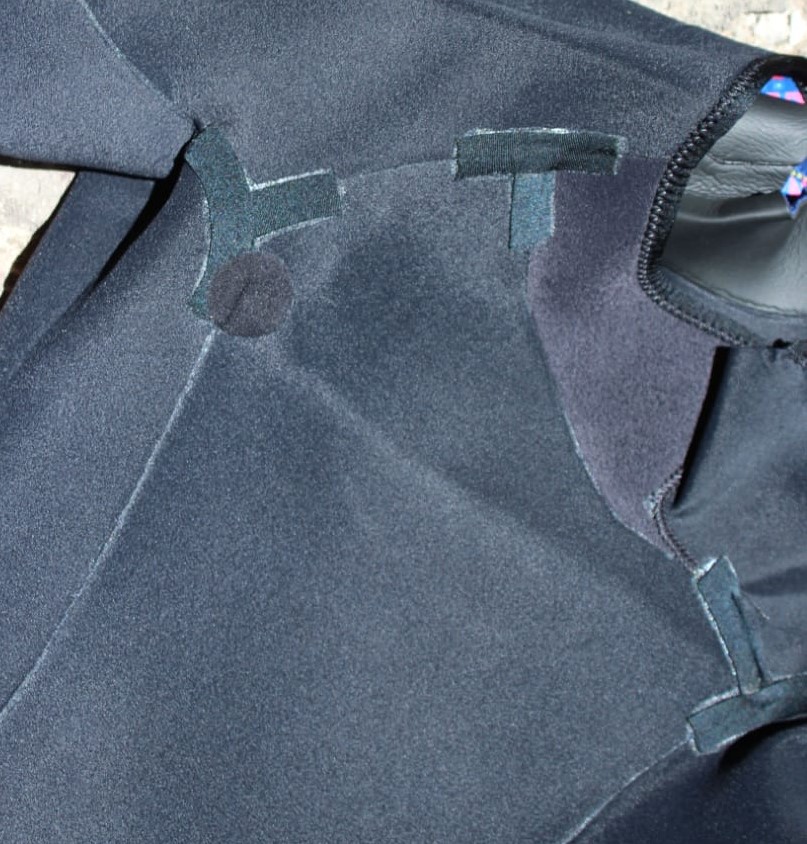 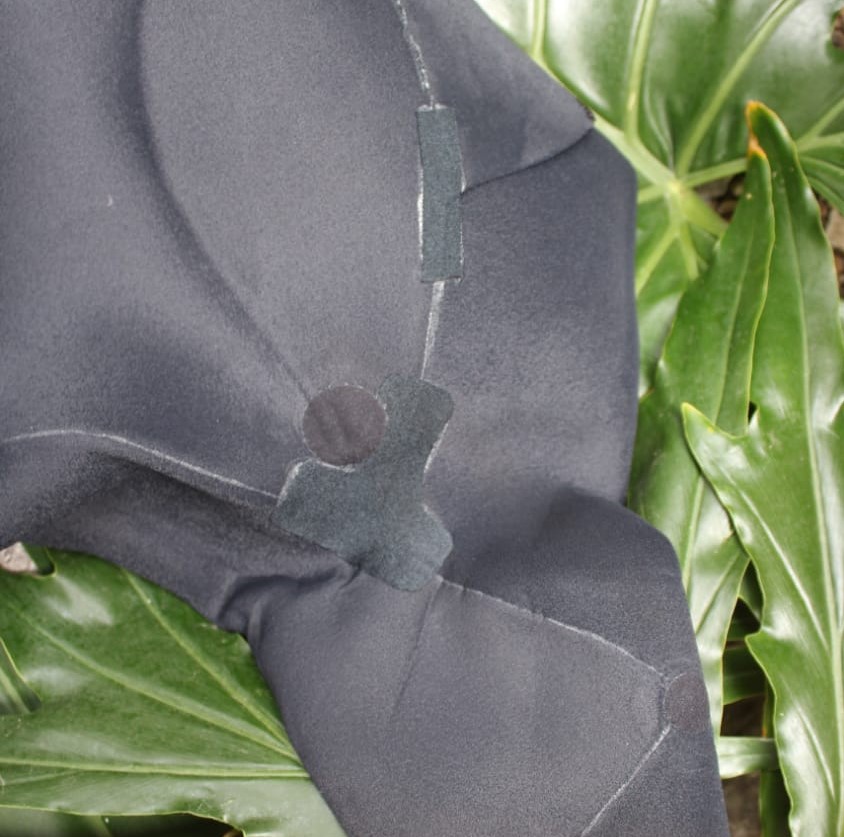 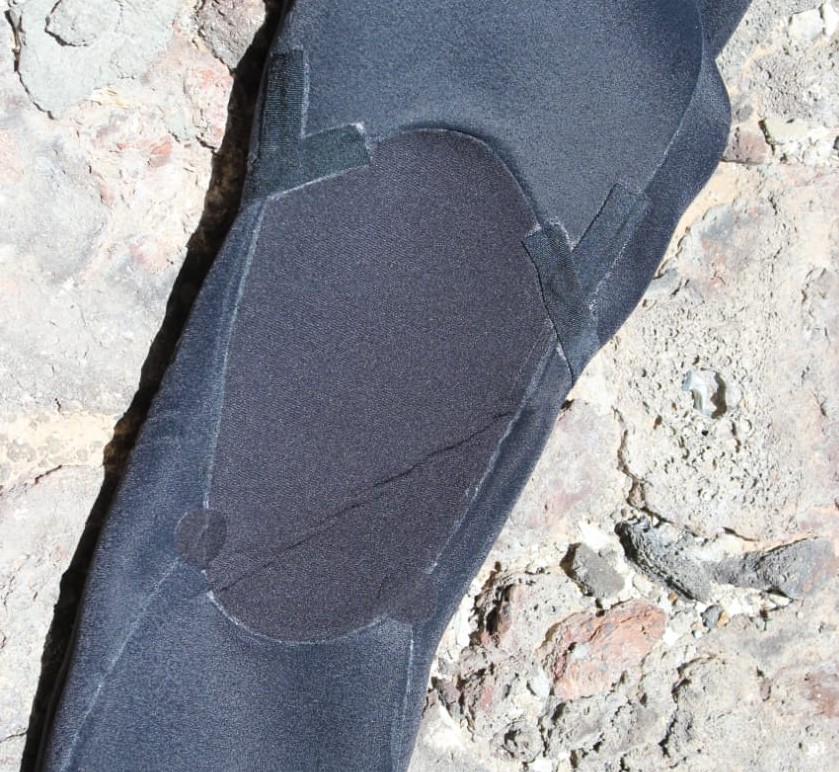 In addition to wetsuits, there are also various accessories, such as: wet boots, helmet, gloves, lycra, thermal lycra.

Lycra is a short or long sleeved shirt made of thin neoprene or lycra, which will protect you from getting sunburnt and / or chafing with the board. If you surf in warm water, we advise wearing a lycra, in order not to get sunburnt. Lycra T-shirts are also handed out for school classes for their trainees to stand out. Thermo lycra – worn under a wetsuit in cold water as an additional insulation.

Water footwear – warms your feet in cold water and also protects against cuts on reef spots. Like wetsuits, it comes in different thicknesses depending on the water temperature. We use reef slippers at our training spot in Tenerife, since the bottom is rocky. Water helmet – used in cold water or when it’s very windy. It must fit your head and ears snugly. In order to provide your ears with extra protection, you can use special earplugs. Also, the helmet is specially designed to block the access of water through the collar, reducing water penetration.

Headwear – in order to protect the head and face from the bright sun, you can use special caps and Panama hats. They are fastened under your chin, so they don’t fly off in water.

Water gloves – keep your hands warm when the water is very cold. They must fit your hands tightly.

When in very cold water, your footwear and gloves must be TUCKED IN the wetsuit.

Many of you ask whether it’s possible to go for a ride in swimming goggles. We do not recommend this. Firstly, they can easily fly off. Secondly, it looks strange in surfing so, it’s not accepted to use them and thirdly, you get used to salt water rather quickly, and there’s no need to open your eyes underwater.

For your wetsuit to last longer, follow the tips:

Now you know why you need a wetsuit and how to pick one!

Have a great surfing and see you on waves!

Sidebar
This website uses cookies, both its own and those of third parties, to collect statistical information about your browsing and show you advertising related to your preferences, generated from your browsing patterns. If you go on surfing, we will consider you accepting its use.
More info Accept